Australian football is on the verge of significant change. Constitutional reform has made the FFA more representative, A-League independence has shifted management responsibilities to clubs and a rapidly changing media environment has put fundamental value sources at risk. As power dynamics shift so do the incentives of stakeholders. As the game’s protector in Australia, the FFA has a responsibility to ensure incentives of all stakeholders are aligned for the good of the game.

A clear vision is needed to focus the forces of change

Previous attempts at presenting a vision for the game (Whole of Football Plan, Four-year strategic plan) have largely failed to engage football stakeholders.

Key topics that were present in these plans included marketing metric targets (little use to grassroots stakeholders), player pathway plans (which are now under review), and facility management points (limited in guidance, leaving State Federations to take leadership).

Key themes that weren’t present in these plans included a guide on A-League expansion (leaving a delayed process end in controversy), A-League independence (which was driven by clubs), or a national second division (forced by the recently created AAFC), Constitutional reform (which was forced by FIFA).

What was and wasn’t provided in these visions – and the actions that have followed in recent years – indicate that the FFA has not been driving Australian Football. Professional clubs, media companies and grassroots have been forced to use their resources and do it themselves.

As stakeholder incentives diverge, the FFA needs to take control of the direction of the game. A necessary step in achieving this is for the governing body to present a long term vision of football competition in Australia. Competition guides stadium planning, A-League expansion, Second Division scope, player pathways and relationships with government. They are a pivotal component of Australian football and not since 2004 has football been presented clear direction in this area.

Below is a proposal I have put together as a guide for what I would like to see from the FFA.

The tiers of Australian football competition in order of importance will be:

In addition to these senior-team leagues, the current NPL reserves competitions will continue in parallel with its senior counterpart. A1 and A2 teams will also have reserves teams playing in a 32 team Y-League system which will be split by conferences according to travel costs.

The A1 and A2 competitions will both consist of a 30 round home and away season followed by a post season finals series.

In the A1 League, the top four teams will contest home and away semi finals followed by a finals at the top ranked team’s home ground. Winner of the Grand Final will be A1 Champion. The bottom two teams from the A1 League will be relegated to A2 at the conclusion of the regular season.

The number of teams and competition format of each NPL will be decided by the governing State Federation. The favoured structure is 16 teams contesting a 30 round home and away season. The teams deemed State Champion will qualify for the National playoff series for promotion to A2.

The National Playoff series will go for five weeks. The eight NPL Champions will be placed in two groups of four and play each other team in the group once. The winners of each group will play off against the runner up of the other group. The winners of this game will be promoted to the A2-League. The promoted teams will then play off in a final to decide the National NPL Champion for the year.

The FFA Cup will be revamped to minimise offseason length and provide more consistent meaningful football during the year for professional teams.

The FFA Cup proper will expand to begin at the Round of 64 and will run through August and September. All A1 and A2 teams will qualify at this stage, state teams will qualify for the remaining spots based on an allocation by state federation the winner will receive a place in the Asian Champions League. 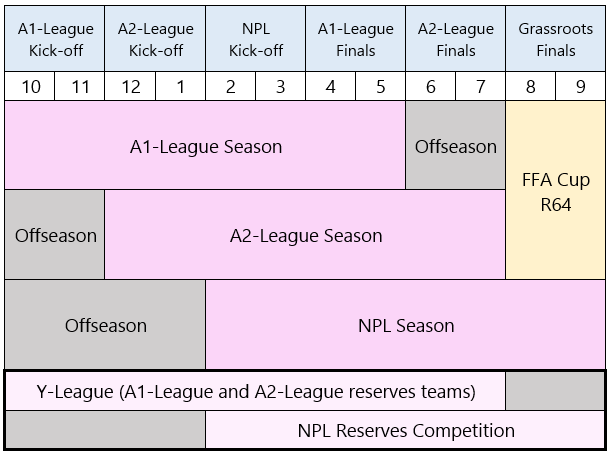 The calendar provides another key feature currently lacking from Australian football in that there is no cross over in Australian domestic competitions with a strict 30 September cut off. This allows for concise storytelling and improved marketing every Australian Football New Year.

The staggered features of the calendar and position of the FFA Cup also allows varied story telling unique to Australia with clear progression for each league and the year as a whole.

Key aspects of my proposal involve maximising cash-flow stability throughout the year for all clubs regardless of league status (as demonstrated by the tables below), optimising off-season considering the existing Australian football ecosystem and connecting the tiers so that all participant engage in shared competition. 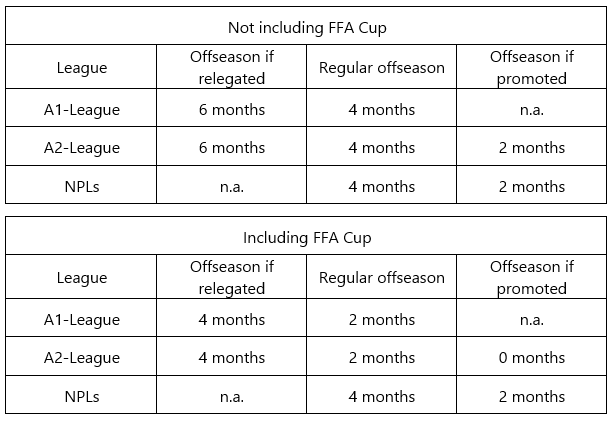 This may be a long term vision but there are principles that the FFA can implement in the short term:

This proposal is a collection of my thoughts and considerations after many months of contemplation, and some of it still needs further though such as the maintenance of a finals series. The ultimate goal of this proposal is for feedback (for my own benefit – so please comment below!) and ultimately to help get the FFA to produce a similar long term plan. Competition is Football’s pulse and competition visions are necessary to align stakeholder incentives, actions and avoid wasted resources fight against each-other and against uncertainty.

We have already seen a Matildas Home Base proposal, National Second Division, A-League Independence and new stakeholder groups start in reaction to inaction. It is my hope that the new FFA can take back the steering wheel from potentially conflicted stakeholder groups and drive Australian Football towards a better future for the game as a whole.

3 thoughts on “Competition vision a must for the FFA”

Thanks for checking out my blog.